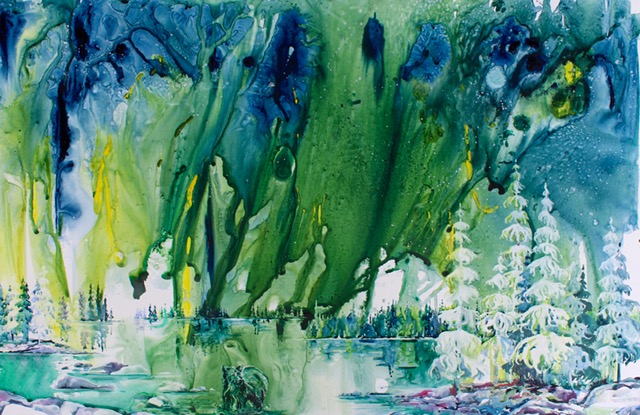 We are  indeed happy when one of our artists of the month returns with new work. Westwood extends a warm welcome and thanks to Karen Bishop for her continued support of this program. We have featured Karen’s work in the past, as well as several artists that Karen recommended through her connections as owner of Daffodil Gallery. Karen has recently been exploring a new series of paintings inspired by Spirit Bears.

Neither an albino nor a polar bear, the Spirit Bear is a rare white North American black bear with an unusual recessive gene (similar to the gene that causes red hair in humans) found almost exclusively in the Great Bear Rainforest.

Officially named Kermode bears, they were named after Frank Kermode, former director of the Royal B.C. Museum.  In the Tsimshianic languages the Kermode or Spirit Bear is known as moksgm’ol.

Kermode bears hold a prominent place in the oral traditions of the indigenous peoples of the area.  There are various telling of how and why the bears became white but the story goes something like this:

Raven, The Creator, wanted something to remind him of the Long White Time, when the earth was covered in snow and ice. Raven chose Black Bear, the keeper of dreams and memory to help him. Black Bear was found, as he always is, as a constellation of the stars in the night sky.

Black Bear agreed to let one out of every ten Black Bears turn white to remind Raven of the misery of the great ice age. In return Raven set aside a special area of the world for these bears – now known as the Great Bear Rainforest.  It was a remote paradise where the bears were to live in peace forever.

I am fascinated by the mystery and beauty of these bears and use a reductive technique to lift colour from the yupo paper, revealing the shape of the bear.  The paintings are not intended to be true representations of Spirit Bears, rather I feel the bear out, creating it from the organic background.  Their colour blends into and from the paint, making them part of the surroundings, something that has always been and will always be.
(researched with files from CBC and BCSpiritbear.com)

Westwood has many ways to connect and get involved – Sunday morning worship services are just the beginning. Small groups gather throughout the month in Community Groups, 4th Fridays, Chalice Circles, choir, Social Justice committee meetings, and Buddhist meditation, to name a few.